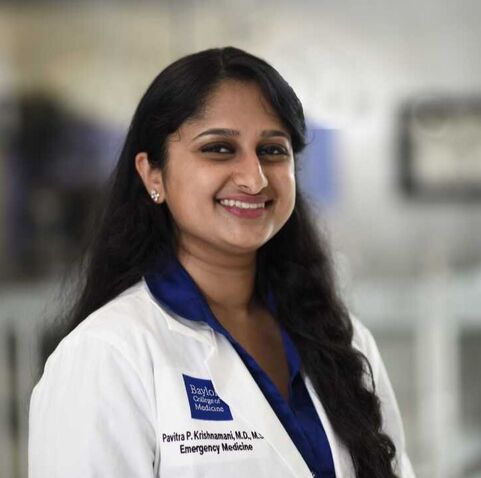 A Resident Physician in Emergency Medicine, Pavitra P. Krishnamani graduated with her MD from Thomas Jefferson University and MS in Global Medicine from Keck School of Medicine of USC. During her medical education, she completed advanced training in Healthcare Innovation through her Clinical Fellowship at Jefferson's Digital Innovation & Consumer Experience group (DICE). She has previously held fellowships at both the Sidney Harman Academy for Polymathic Study and the Levan Institute for Humanities and Ethics at USC. In 2015, she was inducted into the Carson Scholar's "Twenty Under Thirty" Hall of Fame for her work with refugees and migrant populations.

As a fellow at DICE, she practiced clinical design, serving as a liaison between clinical work and innovation at Jefferson. She was a consultant for several large-scale initiatives at DICE, where she provided critical input into the design process to ensure projects enhance both patients' and providers' experiences. Most notably, she co-founded Jefferson's AR VR Initiative and, in this capacity, leads one of the first studies in the US examining how virtual reality (VR) can affect therapy and education in outpatient cardiac rehabilitation. She also spearheaded the initiative's first venture into product design, exploring how VR can help prepare providers for high-acuity clinical situations. As a core member of several other DICE projects leveraging VR and artificial intelligence, Pavitra has been integral in cultivating relationships and activities that help further infuse digital innovation into clinical medicine at Jefferson.

Pavitra's prior design work has been in global health. In India, she consulted on a UNICEF-funded global health project at the Institute for Child Health, where she  worked with local team members to design a project examining neonatal care provided in the hospital through a child's first year of life. Her work abroad has also resulted in a collaborative WHO concept paper based in Italy, where she spoke about the future of global health at Italy's Festival della Salute Global in 2019.  At home, Pavitra has several years of experience working clinically with Philadelphia's refugee population and leading efforts to provide holistic services to empower them to participate actively in their care. During her time at Jefferson, she served as Vice President and later Clinic Director for Refugee Health Partners, an organization that coordinates clinics, advocacy efforts, health services, and educational programs for Philadelphia's refugee communities. She has previously led teams that competed in several global health case competitions, including Emory's International Case Competition and the Clinton Global Initiative-funded Hult Prize.

Passionate about education, Pavitra is a cited author and keynote speaker. She has continued to publish, present, and give interviews on her work in healthcare innovation and global health, speaking at conferences internationally and at several major US universities. Most notably, she presented at Stanford's MedX and the VR & Healthcare Symposium at Harvard in 2018. She has also published her research in collaboration with the Amen Clinics and presented research posters at Jefferson, UC Berkeley, and USC. With her background in journalism, she most recently served on the Board of Trustees of the American Medical Student Association (AMSA) as the Student Editor for AMSA's The New Physician.

Finally, in addition to writing, Pavitra's creative outlets include music, dance, and photography. True to her nature as a polymath, she is always excited to discover new ways to synthesize her talents to make a positive impact on the people around her.